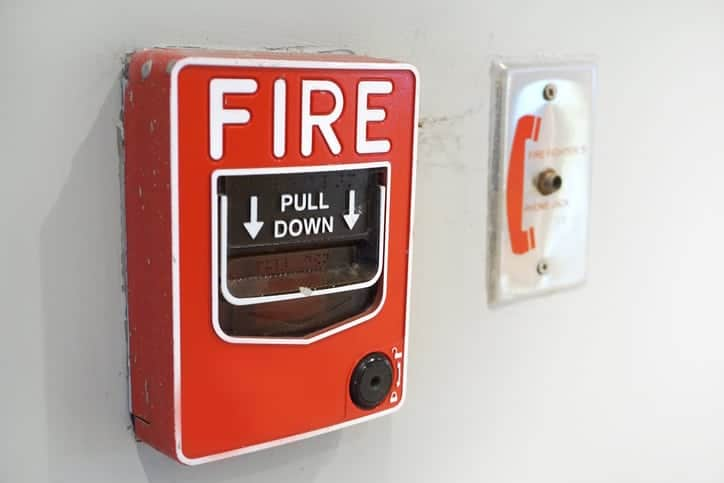 Both residential and commercial premises in Australia should be fitted with quality smoke alarms and fire alarm systems. If installed and maintained by industry professionals such as a fire protection service, those alarms will effectively serve the purpose they were designed for: Sounding a warning in the event of a fire.

Many parts of the country are affected by thunderstorms during spring and summer but did you know that thunderstorms can have an effect on fire alarm systems? Read on to discover more about thunderstorms and fire alarms and what you can do to ensure your premises remain safe and that your fire alarms continue to operate effectively, even during storm season.

What Is a Fire Alarm?

The idea of a fire alarm system is for it to detect smoke and fire and sound an early warning to the occupants of the building, giving them time to escape to safety. A quality system will be able to differentiate between smoke and flame and not get confused with things like fog, dust, or even steam. The alarm system, while it needs to be sensitive to smoke and fire, cannot be so sensitive that it goes off every single time you cook a meal or toast some bread.

Fire alarms are like the first line of defence in the fire safety system and play a major role in saving lives. Following the sounding of a fire alarm, things like fire sprinkler systems will then kick in to douse the flames.

Having fire alarms connected to a Fire Indicator Panel (FIP) is an added line of defence, as a FIP can activate other fire suppression systems and serves as an important guide for the fire brigade.

How a Thunderstorm Can Affect Your Fire Alarm System

We all know that thunderstorms can occur suddenly and many Aussie thunderstorms can be quite ferocious. Lightning is incredibly powerful and when it strikes a building or power lines it can cause a power surge. Fire alarm systems can create an electrical gateway for a power surge to enter a building, which can then cause damage to your fire alarm system and other electrical devices.

Another thing a thunderstorm can do on occasion is actually trigger a fire alarm system, causing it to sound a false alarm. Power surges, as mentioned above, are often the culprit when it comes to false alarms during a thunderstorm. Once again, surge protectors are your best defence to both protect your fire safety system as well as prevent your fire alarms from being falsely activated.

A lightning strike can sometimes cause a real fire to break out inside a building. In this instance, surge protectors and battery backup for your system are even more paramount, as you’ll want your fire alarm system to remain online to alert everybody to the danger of a fire, giving everyone time to evacuate the premises.

Effective fire safety isn’t just about having systems in place to alert people to danger or to suppress fires, it’s also about having backup systems to protect the primary systems so that everything remains functional at all times and provides the ultimate protection.

Having a lightning rod installed on the building can also help to protect your fire alarm system and all other electrical devices.

Thunderstorms have the potential to wreak havoc with a fire alarm system but with some other forms of protection in place, your system will remain functional and in top working order even during storm season.

How to Avoid the Common Bill Paying Mistakes?

Things To Consider When Buying A Multitool